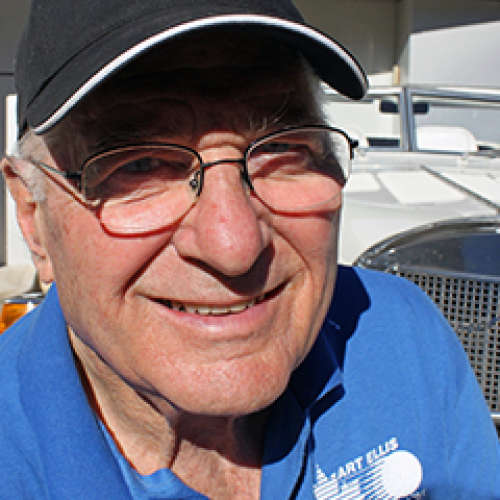 Art Ellis has been actively involved in the Mackenzie Printery and Newspaper Museum since 1997. He has served the board in several capacities including Vice Chairman, Treasurer and bookkeeper.

Art's many hobbies, include the design and casting of commemorative medals. He was a director of the Medallic Art Society of Canada, and also active in the American Medallic Sculpture Association. Recently Art designed and cast the winning entry for Canada's 200th anniversary of the war of 1812 and attended the presentation of the first medal to Governor General David Johnston.

Art's molasses corn bread recipe is as follows.
Cornmeal Molasses Bread This corn bread recipe is my absolute favourite! It has a slightly sweet flavour, and a slight "crunch" from the cornmeal. It's great for sandwiches, and makes the BEST toast!! Ingredients 1 c very warm water (about 110 degrees) 1/4 c molasses 1 pkg active dry yeast (or 2 1/4 tsp.) 1 Tbsp canola or vegetable oil 3-4 c bread flour 1/4 c corn meal 1/2 tsp salt Directions 1. Combine the warm water, molasses, and active dry yeast in a glass measuring cup or small bowl. Stir with whisk until yeast dissolves, and then let stand about 5-10 min. until yeast proofs. 2. Add the oil to the yeast mixture. In a large bowl, combine the cornmeal, salt, and about 2 cups of the flour. Add the yeast mixture, and stir to combine. Add flour a little at a time until the dough forms a ball and pulls away from the sides of the bowl. 3. Knead dough on a lightly floured surface, adding flour if needed, until dough is smooth and elastic (8-10 min.). Put dough in an oiled bowl (or spray with cooking spray), and turn to coat. Cover with plastic wrap or damp towel, and let rise in a warm place for 1 hour or until doubled. 4. When doubled in size, deflate dough, and shape into loaf. Place loaf in a greased 9 x 5 in. loaf pan, cover, and let rise until it's about 1/2 in. above the pan. Bake at 375 for about 25 minutes. Remove from pan and let cool. For a softer crust, brush top lightly with melted butter after baking